With the same name of the Greek goddess, Artemisa, the Cuban province, has become one of the youngest territories of the island after the administrative-political division of 2010. Before that, it belonged to the limits of La Habana, capital city of the nation and from which inherited de cosmopolitan air that is possible to breathe in only a few areas of its 642 square kilometers, because what has made Artemisa famous is its exuberant nature.

The province is relatively small. It borders the commercial zone of Mariel, the gulf of Batabanó in the Caribbean city, the Alquizar and Calendaria counties It has about 507,000 inhabitants and its main strength is its rich and attractive countryside. 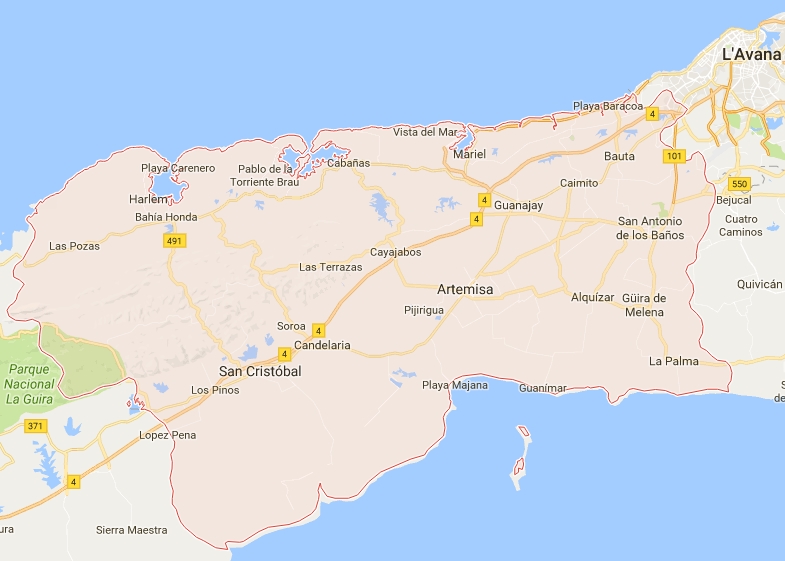 Fruits, rice, sugar cane and a lot of tobacco plantations are part of the forestall panorama of the territory, for which reason is catalogued by its experts as an "agricultural jewel" in the whole dimension of its 11 municipalities.

Artemisa seems specially designed for ecology lovers, hikers and young backpackers, eager for experiences. One of the best-suited places for this kind of touristic activities is the Botanical Garden Orquideario Soroa, located in Candelaria, 210 meters above the sea level and 56 miles away from La Habana. More than 12 thousand tourists validate, year after year, the excellent state of conservation of this place, praised by the National Council of Cultural Heritage.

The Sierra del Rosario is the best triumph trophy of the territory, and although it is very protected by forest rangers due to its biological importance, tourists can visit and enjoy – also – of the touristic complex Las Terrazas, the first eco-community of Cuba.

The weather is fresh, humid, like in the mountain, since it is very close to the Sierra del Rosario, the first Cuban biosphere reserve.

Very close to Las Terrazas, which is already considered as national and international reference for other development zones with similar characteristics, is the house that inhabited the famous Cuban author and singer Polo Montañés.

When Las Terrazas complex was found, Polo and his band started playing in the different touristic installations of the place, among them, the Hotel Moka, Rancho Curujey and the Cafetal Buenavista. At that time, he met the owner of a record company whom proposed him a contract to record several discs. The CD Guajiro Natural was born, which sold more than 40,000 copies and earned the Gold and Platinum discs to be recognized as the most heard international artist.

There is also an special place in Artemisa, catalogued as ‘’Cuba’s rainbow’’ with an extraordinary natural waterfall of 22 meters high, that has transformed into one of the most shared places by visitors in social media.

People travel in mountain bikes or in horses to this venue only to enjoy the view of more than 700 plant species since its only 70 kilometers away from La Habana.

The city of San Claudio is quiet and offers beautiful walks and the beauty of long bath in the river San Juan.

In Artemisa, due to its natural gifts, International Workshops about Natural Tourism have taken place during the last years, where the attractive of the geosciences, the architecture as an identity, the tourist planning and the sustainable buildings in natural ecosystems are debated.

Its program usually includes visits to the town museums and the Cafetal Angerona, an old ranch that was a symbol of the splendor of the plantations of the Cuban occident in the colonial times.

The owner was the German immigrant Cornelio Souchay, whom acquired this lands in 1813 and made them grow with the love of his life, Úrsula Lambert, a dark skin Haitian born free that had also arrived in the largest Caribbean island with her parents and her master, the colonist Lambert, escaping from the war produced by the revolution in Haiti.

Another great attraction of the county is the Christmas festival of the Charangas de Bejucal, which dates back to 1800 and is held annually on December 24th in the small town of Bejucal. On that date, thousands of people gather in the streets, among dazzling floats and bands to create an unusual mix of fantasy, dance, painting and music that has become a sensation for visitors.