When to go to Cuba

Cuba can be visited all year, the climate is tropical, with a dry season and comparatively fresh from late November to mid-April, and a warm, humid and rainy season from late April to early November.

Visit of the city and excursions

To visit the city and make excursions is preferable to the coolest time (December to February), and still the dry season (late November to mid-April). In this season the weather is pleasantly warm, with daytime temperatures around 26 degrees from December to February in Havana, and around 28 in areas further south. The rains are contained but possible, most likely still on the northern slopes, which are also exposed to the cold raids by the United States. These brief raids cold from December to March, especially in the western part (such as Varadero), may bring some 'fresh day, and a little' cold night (sometimes in Havana minimum temperature falls around 10 ° C). More rarely reaches the cool south coast (eg islands as Cayo Largo or the Isle of Youth), and even more the South, especially its southern coast (Santiago de Cuba, Guantanamo).

Go to the sea

For beach life, the better period is the Easter (late March to April).

During the rainy season (May to October) the sun does not fail, the hottest months are July and August, with temperatures that do not exceed 33/34 degrees but with the humidity rather high. Rainfall is heavy in the form of thunderstorms in the late afternoon. This season knows a relative pause in July, especially in the south, when storms are less frequent.

Between August and October you can have hurricane that could hit Cuba especially in the east.

To take into account that in the south-east coast of the average temperature is about 6/7 ° C higher than the north-west and the north coast is easily affected by the Atlantic perturbations. 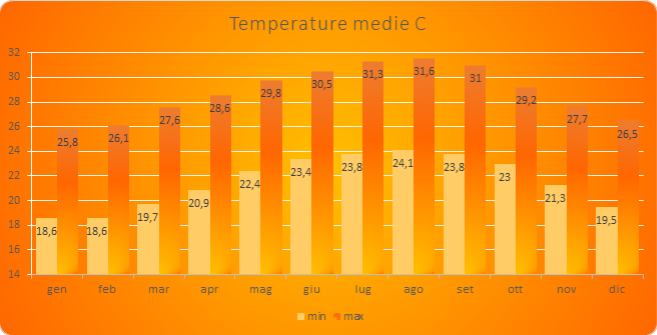